Travis Barker survived a plane crash in September 2008 and the experience made him reevaluate this life and get sober.

The Blink-182 drummer was addicted to opioids at the time of the accident which killed Barker’s close friends Chris Baker and Charles “Che” Still, in addition to the two pilots. Barker’s friend Adam “DJ AM” Goldstein also survived.

They were returning home from a show in South Carolina when the plane’s tires burst upon takeoff.

“People are always like, ‘Did you go to rehab?’ ” Barker told Men’s Health. “And I [say], ‘No, I was in a plane crash.’ That was my rehab. Lose three of your friends and almost die? That was my wake-up call. If I wasn’t in a crash, I would have probably never quit.”

TRAVIS BARKER GETS KOURTNEY KARDASHIAN’S NAME TATTOOED ON HIS CHEST

The musician was in the hospital for 11 weeks and revealed his opioid tolerance was so high he would wake up during surgeries.

Barker’s burns covered 60 percent of his body and he underwent 26 surgeries and multiple skin grafts. He also had to relearn how to walk. 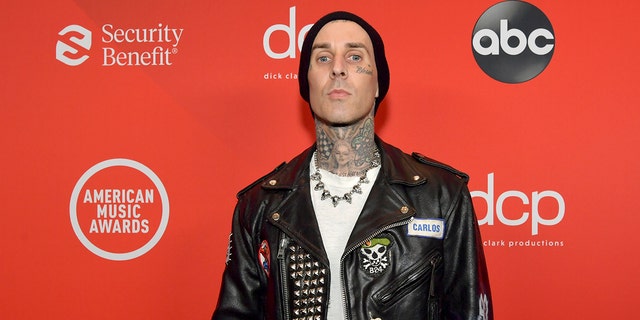 “I was told I wasn’t going to run again because I had so many grafts on my feet, and there was even talk of me never playing the drums again,” Barker recalled. “As soon as I could walk, I could run. As soon as I could move my hands and my hands healed, I was playing drums. And now I’m in better shape than I’ve ever been.”

The 45-year-old is now vegan and runs and boxes every day but suffers from PTSD. He described the time after the crash as “dark.”

“I couldn’t walk down the street. If I saw a plane [in the sky], I was determined it was going to crash, and I just didn’t want to see it,” he said.

Barker also sought therapy to help deal with his survivor’s guilt. “It’s gotten better the further I get away from it,” he admitted. “The closer I was to it, it felt like I was closer to the bad stuff than I am to the good stuff. I felt closer to the experience of trying to escape, [to] being in an accident and being burned, trying to grab my friends from a burning plane. That haunted me for a long time. And as long as I was closer to that than this good stuff, I was always thinking about that.”

The rocker is now in a new relationship with Kourtney Kardashian. They started dating in February.